Yasir Hussain Trolled A Fan Who Asked A Serious Question About Transgenders And Pakistanis Are Very Pissed At Him!

Yasir Hussain Trolled A Fan Who Asked A Serious Question About Transgenders And Pakistanis Are Very Pissed At Him!

There must have been a time when we would joke about someone’s masculinity, someone’s beliefs or the way someone looks or acts. Not that it was the right thing to do, but it was normalized to such extent that it seemed okay to do so. But now we are in 2019, we are much more aware, mature and sensitive enough not to joke about something that might hurt others sentiments but apparently, Yasir Hussain isn’t.

Yasir Hussain made a very indecent remark about transgenders.

There are some celebrities how to handle criticism very gracefully, either by letting go of the rude and harsh comments or ignoring them totally. Some, on the other hand, might say something terrible and start another issue that might expose their mentality. Yasir posted a picture of himself dressed as a woman for a new role and someone asked a very simple and honest question that why not hire a real transgender? To this Yasir replied “Kyun aapko job chahye?”

This was absolutely unnecessary and insensitive for a celebrity having so many followers, or anyone at all for that matter, to make such jokes or use transgenders as an insult.

The guy responded back and his reply has won every heart.

The person who first commented on the post questioning the reason to why they couldn’t hire an actual transgender and Yasir asked him if he wanted a job, came back with a remarkable reply. He said that “Being transgender is nothing to be ashamed of. I am not transgender but calling me transgender isn’t offensive to me“. This right here is masculinity without a hint of toxicity. 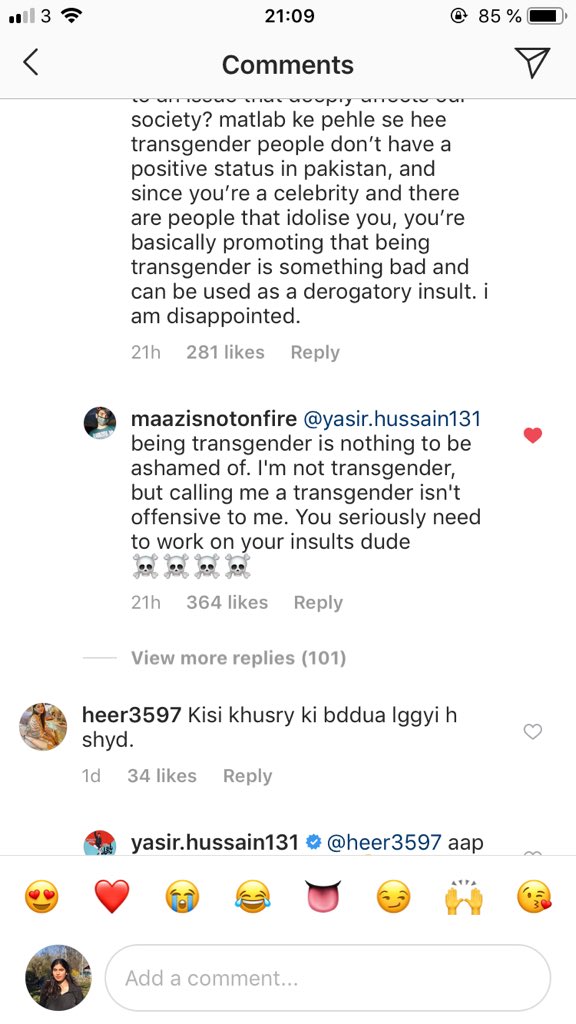 But people are really mad about this and rightly so.

Fame comes with huge responsibilities. And not everyone is able to use it right. You have a voice use it for a better cause because people will listen to you more than normal people. Don’t waste it making sarcastic insensitive jokes on such serious issues. We all know the oppression and mistreatment faced by transgenders in our community.

When they're famous, they have a voice and instead of raising it for sensitive issues. This is what they do, just because these people are elite doesn’t mean they get to make fun of anyone who doesn’t fit their standards.

And this is not the first time he has publicly made an insensitive joke.

He also made a joke about child abuse at Hum Awards seeing Ahsan Khan and it was absolutely disgusting. Yasir might just need to tone his humor down a little because bro, it really isn’t doing anyone any good.

Even at Hum Awards when Ahsan khan won an award for Udaari, the same Yasir Hussain joked

Whatever his stance is on transgenders is absolutely disappointing and he owes an apology to the transgender community and to the public in general. We are not unaware of the hardships faced by the transgenders and instead of raising a voice for them you are making a joke out of them. This is highly unacceptable. And for now, he is canceled.

Anyway Yasir Hussain is literally cancelled. I really really used to appreciate his talent but this absolutely ridiculous. He literally thought he could get away with saying that what the actual hell