Amir Khan Is Peeing Blood After Getting Punched In The 'Sensitive Area' By Crawford And All Men Feel His Pain! 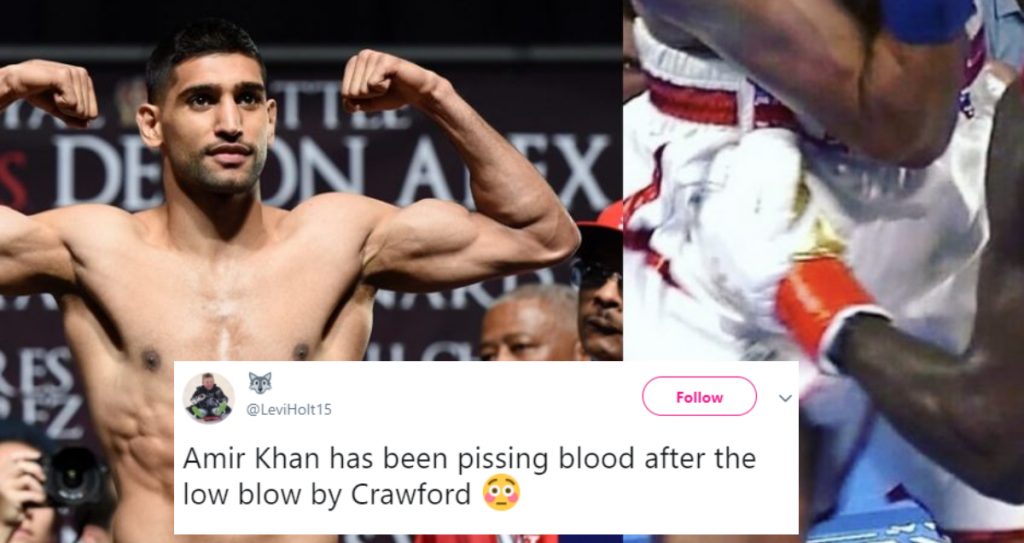 Amir Khan Is Peeing Blood After Getting Punched In The ‘Sensitive Area’ By Crawford And All Men Feel His Pain!

The boxing world isn’t aware of the class of the British boxer Amir Khan. Amir Khan has a lot of fan following in Pakistan thanks to his Pakistani origins and his frequent visits to Pakistan doing a lot of social work. Khan has done a lot for the promotion of boxing in Pakistan too. But his last few fights have not really been able to justify the rest of his career. His recent match with Terence Crawford ended up with him getting knocked out but according to Khan, he is not a quitter.

The fight between Crawford and Khan met a very unusual end when Crawford accidentally attacked Khan with a low blow. The punch landed very very close to Amir Khan’s sensitive area and that ended up with him peeing blood as per tweeted by him.

People have had different reactions on the result of the fight. Some are calling it disgusting by Crawford as he hit Khan in a place where he really should not have.

Lets cut Amir some slack and not bash him for losing this game and getting knocked out. Imagine yourself getting punched in the nuts. Yes, it really is painful to even imagine that isn’t it? Now imagine being punched by a world-class boxer right there. Not enough? Imagine being punched in the nuts by a world-class boxer that is defending his title. You probably got it right this time. That is what Amir Khan went through.

#CrawfordKhan Amir Khan gets punched in the nuts, can't continue, and people are booing? Most guys lay down after taking a gust of air down there, but sure, hate on a guy who just got walloped down there from a world class boxer.

But some have different opinions about Amir Khan.

A quitter? Come on man, the guy just got punched in the nuts. There is no way he could have continued the fight.

And Pakistanis came defending their champ.

It is kinda cute how Pakistanis think of Amir Khan as their own even though he is a British national, born and bred there play for their country. But we do have a big heart and consider him our own and will defend him no matter what!

Amir Khan is a loser, but he’s our loser and we’ll always love him for that. ????

One knockout doesn’t define Amir Khan’s abilities and class but if there is a loss, people should not forget his other victories.

Do you guys think he did? Lose it?

I think Amir Khan lost one his balls after this low-blow ?#CrawfordKhan pic.twitter.com/vvLSTrqYwU

We hope that Amir recovers soon from this injury and gets back on his feet and into the boxing ring and show us what he is made of. Or maybe just..retire because he has already proven a lot.

But anyways, best of luck for the future, champ.