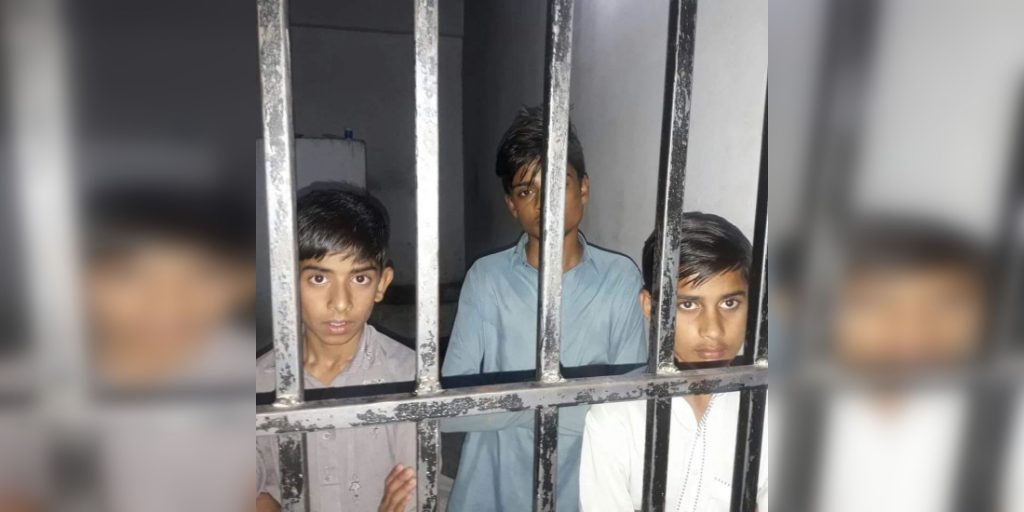 There have been many general discussion these days on the social media about mental illness. These discussions are put forward for people to be more open towards this topic and accept it as an actual existing illness. Looking forward to that there is an issue which needs to be seen as well. Children psychologists are emphasizing on children’s mental illness as an important issue.

Rawalpindi: It was a mindboggling case of the calculated murder of a young boy by two of his class fellows studying in class 8th and one friend studying in the first year (11th grade) in a private academy in Dhoke Kala Khan area here the other day.

The three young boys, Nauman and Akash, brothers aged between 13 and 14 years and Musa, aged around 16-17 years, planned the coldblooded murder of their friend and classmate, Zeeshan, a grade 8th student of a private school in Dhoke Kala Khan.

The murderers cunningly picked the time to carry out their plan when they went to Zeeshan’s home at ‘taraveeh’ prayer time and asked him to join them in a game of cricket in a ground near Islamabad Expressway and Dhoke Kala Khan.

Unsuspecting any bad intentions, poor Zeeshan told his family that he was going to the mosque to offer ‘taraveeh’ prayer and walked straight into the death trap his friends had laid for him.

Once reaching a deserted place in the ground, one of the boys hit Zeeshan with a cricket wicket behind his head which toppled him unconscious on the ground. But he was still alive. One of the boys ran to his home, located close by and came back with a knife with which he slit his throat, eventually killing him.

The three boys then picked up his body and dumped it in a deep pit excavated for constructing the overhead pedestrian bridge on the Islamabad Expressway, without anybody noticing them and went back. They sat without any fear or remorse and drafted a letter addressed to the family of Zeeshan, demanding a ransom of Rs1.6 million with the threats of killing the boy if the money was not paid.

They wrote to the family to put the money in a black color plastic bag and drop that at a spot they designated on a map that they had meticulously drawn, evidently using a scale and pen, with all the landmarks clearly indicated on it. They put the ransom letter in a brown envelope and slipped that through the threshold in the dark of the night while the streets and roads were still deserted.

They gave clear instruction in the letter as to not inform the police, come alone walking, drop the bag full of money at the designated spot, turn back and leave immediately, with the warning that failing to do any of the instruction would lead to the death of their boy, whom they had already killed and dumped his body in the pit.

However, the family informed the police. This scribe learned that the police helped the family raise the money on an urgent basis and then laid a trap to nab culprit(s). And while the police arranged a stealth trap around the place, the member of the family of poor, Zeeshan, carried the black plastic bag full of money and dropped at the spot designated in the letter and the map and returned.

Meanwhile, the police kept a close watch on the area. Finally, after about one hour a young boy turned up at the spot, picked up the bag and left. The police, observing that the boy is too young and could be sent by somebody else, tried to follow him to reach the real criminal.

However, the boy started running immediately reaching the street and fearing that he might disappear in the maze of the narrow streets and alleys, the police acted swiftly and grabbed the boy. And to their utter shock, the police found out that Zeeshan has already been killed and the boy turned out to be one of the co-killer of Zeeshan.It was found out that the young boys were mentally too strong for such a heinous crime. Not once they hesitated in carrying out their plan of killing their own friend and classmate.

They were not nervous at all after killing their own friend as they carried his dead body to over almost half a kilometer to dump it in the pit dug for building the pillar of the overhead pedestrian bridge on the Islamabad Expressway.

And then they sat together and wrote the ransom letter and drew the map in such detail, their hands not wavering even once.

Ms. Silwat Shafi, a practicing sociologist working with women and children affected by traumatic conditions, said that this is a most worrying phenomenon that appears to have taken roots in the society.

The unchecked exposure of young children to video games, films and highly suggestive TV programmes full of violence or about violence leave a very deep impact on the minds and behavior of the children of such young age,” Ms. Silwat said.

It is a serious matter and leaves a big responsibility on the parents and teachers of the children of this age to monitor their behavior, keep a check on their activities and movements and keep asking them questions about their activities to prevent them from indulging in anti-social activities,” Silwat Shafi said.

Meanwhile, Ms. Saadia Ashraf, a Clinical Psychologist, while talking to ‘The News’ said that the eldest of the three boys, Musa, seems to be suffering from ‘anti-social Personality Disorder’, which comes because of the social deprivations, infliction of violence, use of drugs and exposure to anti-social activities.

The young men of the age of 15 years and above develop this behavior because of various situations and circumstances they face in the society and react. And exposure to too much violence, in the films, video games, and even on the TV shows, use of drugs spurs the symptoms and encourage them to indulge in violence,” Ms. Sadia Ashraf said.

Ms. Sadia Ashraf, who engages with children with special needs and women confronted with traumatic social conditions, said that the role of parents at home and teachers in the educational institutions is becoming increasingly important to keep a close watch on the behavior of young boys and girls.

Evidently these boys, who have committed the most heinous crime, appear to be holding some sort of grudge against the boy whom they have killed. Such persons suffering from ‘anti-social Personality Disorder’ or the younger ones, apparently suffering from ‘Conduct Disorder’ are driven by the hatred emitting from deprivations and jealousy,” she added.

The most worrisome factor is that the young children, both boys, and girls, are exposed to seriously dangerous anti-social elements in the society. This has brought an immense load of responsibility on the parents in general and on teachers in the educational institutions, in particular, to keep a close watch on the activities and behavior of these young people,” Saadia Ashraf voiced her concerns.

It’s sad to know how children of this age are getting involved in such heinous crimes. What inspired them? What were they thinking?
Categories: life, News
Tags: 2018, Boys, Islamabad, murder, Pakistan, ransom

Pervez Musharraf’s Health Has Worsened And The Awam Can’t Stop Spreading Rumors Of Him Passing Away!

This post is also available in: العربية (Arabic) اردو (Urdu)General Pervez Musharraf is currently facing trial for treason under Article 6 ...

This post is also available in: العربية (Arabic) اردو (Urdu)Nephew of a member of the Punjab assembly, Tahir Randhawa, from Laiyyah, ...