The Roots of Kurdish Struggles 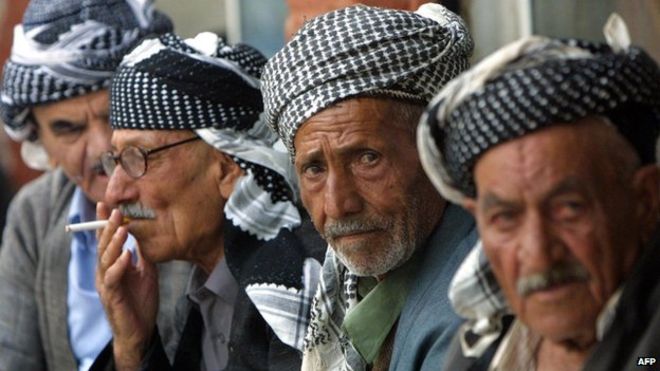 The Roots of Kurdish Struggles

Kurds are an ethnic minority living in the Middle East. Like most other minorities, they have also suffered at the hands of the majority population of the countries they live in. Currently they are Turkey’s largest minority group. They inhabit the area present at the junction of Turkey, Syria, Iraq, and Iran. They are Muslims, their religious beliefs are the same as people of Turkey or Syria, Iran, Iraq. But the issue comes with their language. They have different dialects and argots. The issue begins with their demand of a separate state named “Kurdistan”. The proposed state comprises of the territory of all four countries mentioned above. They want an independent state of their own in which they can enjoy the status of a majority.

But this issue is not as simple as it may seem. History provides various examples of freedom struggles. Whether it was the Indian Subcontinent or the African Algeria, every state had to endeavor physically for independence. Same is the case with Kurds. Currently, there are around 12 million of them in Turkey. Hence the issue is more highlighted in Turkey. Although Kurds are fighting in Iraq and Syria as well, their freedom struggles in those countries are impeded by a noticeable actor- ISIS.

Their issue dates back to the after-treaties of the First World War. In the early 20th century, Ottoman Empire was in a state of decline, especially after the Great War. In 1920 a treaty was signed by the victorious allied powers of the war called the “Treaty of Sevres”. In that treaty, a provision was made for a separate state for Kurds owing to their struggles. But fortunately or unfortunately, that treaty never truly came into force.

And three years later another treaty was signed in 1923, called the “Treaty of Lausanne”. This agreement dashed all the hopes of Kurds for an independent state. It demarcated the boundaries of modern day Turkey, Iraq, Syria and there was no provision of a separate Kurdish state. That treaty entitled Kurds a minority status and initiated the problems. Their struggles began and so did the hostilities towards them.

Kurds have succeeded in gaining some autonomy in Iraq, Syria, and Iran. In Iraq, they have their semi-autonomous region called Iraqi Kurdistan. In Iran, they have Kurdistan province. They are Syria’s largest minority also, and they have been denied their rights there. Since Syria is already caught up in the civil war, it does not focus its attention to the Kurds. And so their struggles go in vain. But the issue comes with Turkey.

Kurds have become an object to play with. The Constitution of Turkey, although famous for its liberal tag, bans education in any other language. Only Turkish is to be taught in schools. This provision aggravates Kurdish hatred. Because they fight on the basis of their language and dialect and take this provision of Turkish Constitution as an attempt to obsolete their language. They have their political party as well, called Kurdish Workers Party, PKK for short.

And through it, their struggles have increased in terms of force. It is termed as a rebel group, but for the Kurds, it is their only hope. None the less, this issue has turned into a properly armed conflict between the two sides. It is still today that there are armed struggles, suicide attacks, and use of force at the hands of the government and Kurds, but no solution in sight.