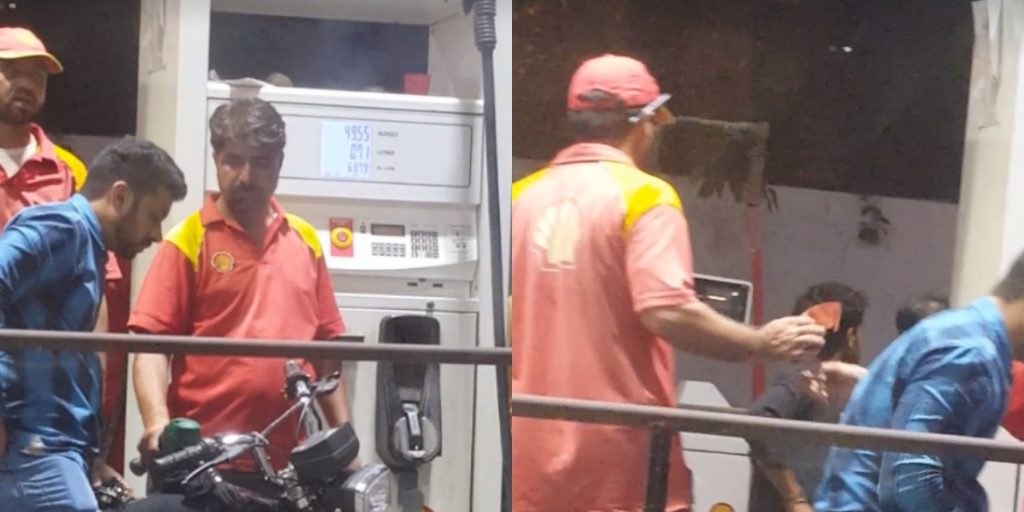 Pakistan, a country that wants the rest of the world to think of it as one that’s righteous and fair needs to reassess its stance and situation. We, the people of the country, are meant to be thwarted by our leaders because they are from us and we are from them.

Ambiguous? Well, don’t be. From a peon to the Prime Minister of the country, every one of us is corrupt and wrong in some unique way. We might not be stealing money from people’s pockets, but we are no saints because most of us always think of ourselves first.

The famous Pakistani saying, “sab ko peyt laga hua hai” fits perfectly in the scenario that has gone viral on social media recently. A video was posted on Facebook by a responsible citizen who caught the biggest petroleum company of the country stealing from the public.

The guys recording the video make sure they aren’t noticed by other petrol pump employees. The petrol pump, sadly, is one of the most famous in the country and around the world — Shell Petrol.

On Rs. 49.55, he stops the machine, with 0.71 liters showing on the tank. Cunning as he was, he distracts the customer by pointing at a passing person and then asks him for the money while the machine is stopped. He still acts as if he’s filling petrol but in reality, he’s just waiting for the customer to be distracted completely.

In the end, the customer innocently hands him a note of Rs. 100 and the employee quickly turns and restarts the petrol meter, which then shows Rs. 100, just in case. The customer then strolls of before the video stops. Now it is very important to know that were it the employees who had started this ‘chor mafia’ or was the owner of the Shell franchise involved himself?

Either way, the particular petrol pump (location unknown) was caught stealing from people red handed. Imagine if they do this on every alternate unaware customer, charging them 50% extra for what they’ve paid; how much money would the petrol pump be making?

Concerned authorities need to act on the issue and make sure there is a system that keeps complete check and balance on the drive-through petrol mafia.