Even In The Darkest Times The Internet Has Come Up With Hilarious Khadim Rizvi Memes! 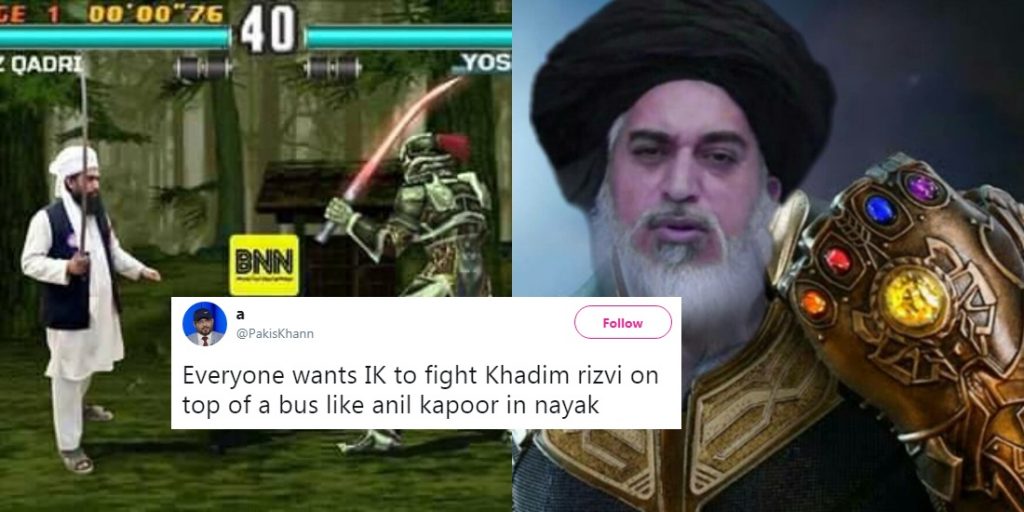 Even In The Darkest Times The Internet Has Come Up With Hilarious Khadim Rizvi Memes!

What happens when you shut down the whole country just to satisfy your ego, hurting business, routines, economy and every single Pakistani in the process? The answer is, you pay for it, only partially, but you do.

That is exactly what has happened after Tehreek-e-Labaik decided to protest against the Asia Bibi Case decision by the Supreme Court of Pakistan, bringing the country to a complete halt. With schools, colleges, Universities, and offices closed, Pakistanis seemed to have a little more time than usual to take their anger out on the internet.

All this, just after Khadim Rizvi’s official Twitter account shocked everybody with tweets straight from the Oxford dictionary. The complex use of words, theories, and international relations terms have sent the people in limbo, where they are extremely sure that somebody from a top university of Pakistan is handling his Twitter account.

“Had Asia been punished under 295 C, the Islamophobes and neo-imperialists would have been silenced once for all. Unfortunately, the government has not shown courage to displease secular-capitalist nexus.” – Khadim Rizvi, on Twitter.

Well, let us see, how Pakistanis are taking their anger of the countrywide shutdown out on Twitter, by making glorious memes of Khadim Rizvi and others from his religious-politico party.

Some created hip-hop videos that perfectly fit the situation

Man with a vision pic.twitter.com/Yjusf8KZUp

Everybody wants the Hoors… but what about what the Hoors want?

Hoors of jannat deserve better than this. pic.twitter.com/iFNJ2enjeJ

You vs the guy she tells you not to worry about. pic.twitter.com/s0j3qVPBIL

Remember that swordsman from the protest? He’s now fighting Yoshimitsu – feel old yet?

Since some universities are open, Pakistanis have found a way to bypass the protests altogether

The only way to go to university #Protest pic.twitter.com/bxDhGd8edX

When you find a perfectly fine vehicle during the protests – you know what to do!

Surely, these tough times remind you of some special people

Blast from the past pic.twitter.com/WLIkBroiPl

After the success of Saudis in Audis, we present you Saudis in Embassies

And finally, even though Pakistan does not celebrate Halloween, Khadim Rizvi was always going to make things SCARY!

By now, the memes might have given you the crux of how Pakistan has reacted to the protests. Look at it this way, when somebody disrupts our peace of mind and routine, the least we can do is vent out through satire or hilarity – which is obviously still better than breaking car windows with sticks and stones.