Indian Celebs Are Showing Their True Colours After The Kashmir Incident And Pakistan Needs To Boycott Bollywood! 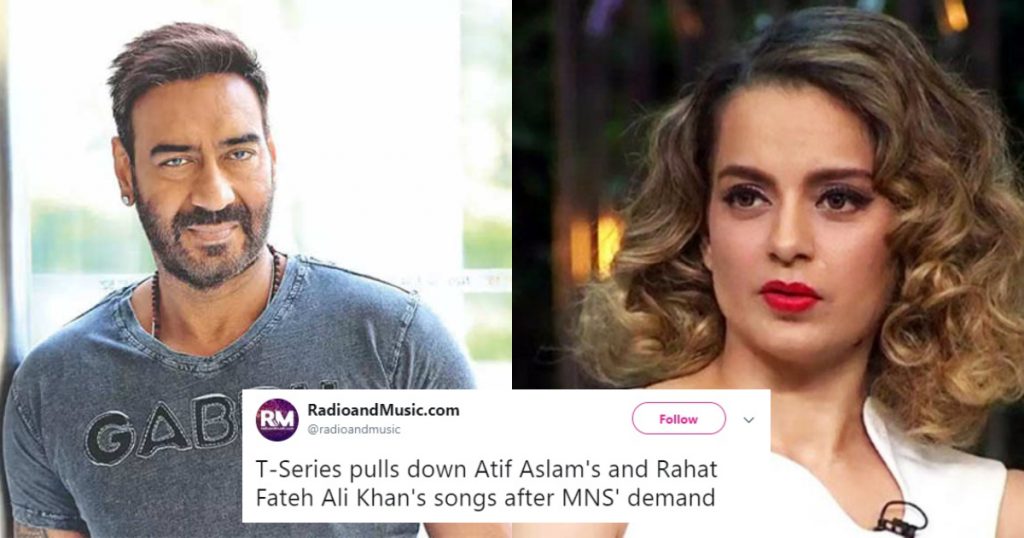 Indian Celebs Are Showing Their True Colours After The Kashmir Incident And Pakistan Needs To Boycott Bollywood!

Pulwama incident or the Kashmir incident has caused a massive dispute between Pakistan and India. Just when we thought that the matters between Pak-Indo would get better, we’re exposed to this feud.

Only recently, Dil Diyan Gallan by singer Atif Aslam and Rahat Fateh Ali Khan, who has sung Mere Rashke Qamar, had collaborated with Bhushan Kumar’s T-Series. These songs were removed from their YouTube channel and this is just beyond us!

Only a day before the incident, Atif Aslam had collaborated with the record label on his new track Baarishein but the music video remains unlisted on Youtube. The video featuring Nushrat Bharucha would not appear anywhere on an internet search.

Isn’t that a bit immature for a country which is well established to opt for a move that low? We’re unable to wrap our heads around this concept!

Also, Javed Akhtar and Shabana Azmi were supposed to visit Pakistan but after the incident, the duo canceled their trip.

To the above Tweet, Pakistani actor Shaan Shahid responded that now is the time they should come and show the friendship and trust Indians have on Pakistan. 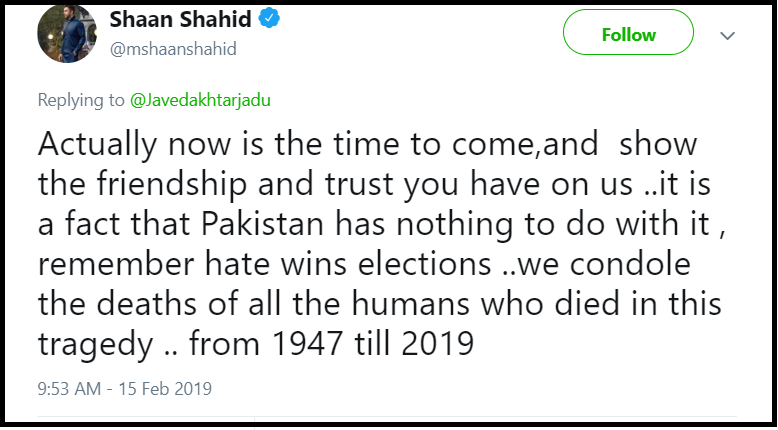 Recently, the Singham actor Ajay Devgan also took Twitter to express his views on the Pulwama incident where he mentioned, “In light of the current situation the team of Total Dhamaal has decided to not release the film in Pakistan.”

In light of the current situation the team of Total Dhamaal has decided to not release the film in Pakistan.

Furthermore, how can we forget what Kangana Ranaut stated regarding Pakistan? While talking to PinkVilla – Raunat said, “Pakistan has not only violated our nation’s security but it has also harmed our dignity by openly threatening and humiliating us. We need to take decisive actions or else our silence will be misunderstood for our cowardice,” she said.

“Anyone who lectures about peace at this time should be painted black or put on a donkey and slapped by everyone on the streets.”

So, in a nutshell – if India has incalculable problems with Pakistan and is refusing to visit us then shouldn’t we as a nation take a step as well?

Moreover, T-Series unlisting the tracks sung by Pakistani singers is just a whole new level of stupid! It’s high time that we cut off our entertainment and sports ties with India. Why should we give them any business at all? We as a nation need to take an action.

What do you all suggest as a Pakistani about banning Bollywood? Let us know in the comments section below.