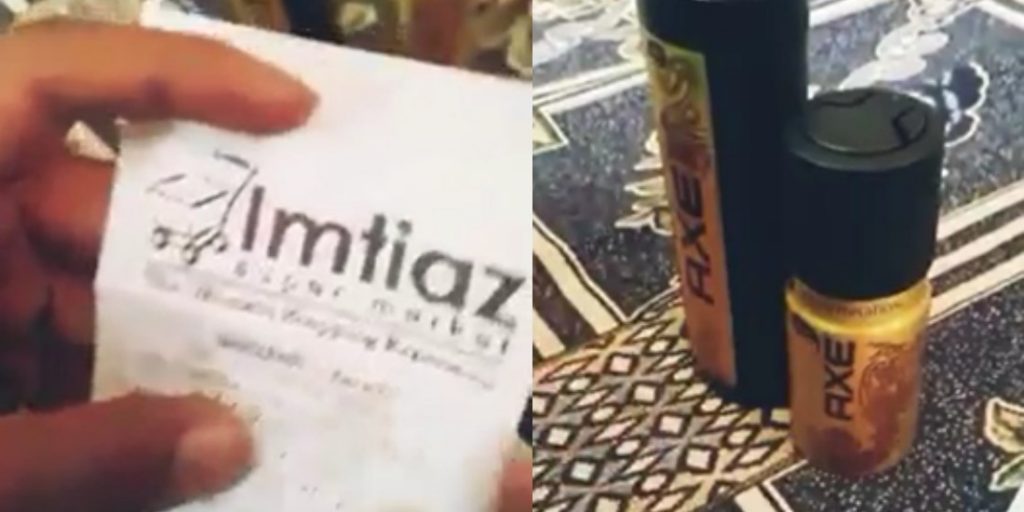 With the beginning of each year, this nation discovers yet another trend that is claiming the lives and health of the people. This year the trend of selling expired products have topped the charts of replacing precious human lives with money. The brutal crime is occurring in every nook and corner of Pakistan where the shopkeepers are knowingly selling expired products that have been kept for years claiming that they are absolutely fine.

However, they ignore the fact that it has cost them a human life as the product can be containing bacteria, contaminated or numerous pathogens that can lead to food-borne sickness. Recently, another incident of a similar kind occurred in Imtiaz Super Market where a victim was tried to make a fool of by hiding the expiry date of his bought product.

THE RECEIPT OF THE PURCHASED PRODUCT

He purchased an AXE shampoo and conditioner on 27th January 2018 from Imtiaz Super Market, Bahadurabad, which didn’t have the expiry date mentioned on it. Being concerned about the purchased product, he informed the management regarding the issue to which they replied that we cant sell you the product until and unless it’s punched. In response to their given excuse, he went up to the counter to purchase the product so that they allow him to open the packaging.

After paying the products price, he again searched for the expiry date after a while he asked the management again to which they replied that it’s alright and kept sending him from one supervisor to another. Moments later, the employees sent him to their boss who was sitting in a room. In spite of dealing with this issue, he was offered food and drinks that he refused. All this mess created by the management showed that they are ones at fault and to assure it he asked the boss about the problem that they are hiding.

STRICT ACTION SHOULD BE TAKEN AGAINST THE SUPERMARKET

Posted by The Times of Karachi on Sunday, 28 January 2018

All such incidents indicate that the rule of laws need to take immediate action against all the organizations risking the lives of people and then justifying it with their bogus statements. Whoever is at fault should be held accountable so that we could have a better Pakistan.