“You Are Warriors Of Pakistan!” Asad Umer Tells Parhlo And Others After Defending Pakistan On Social Media! 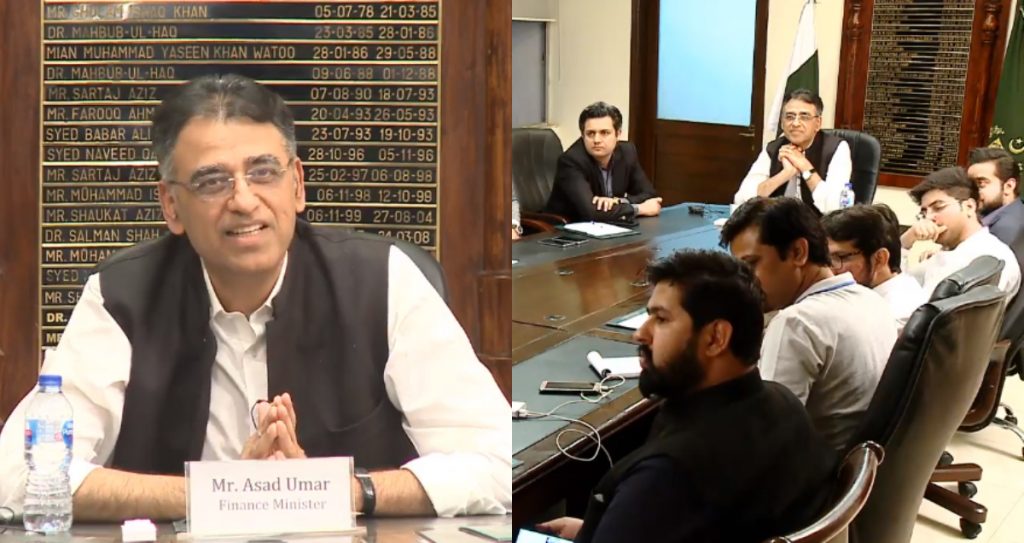 “You Are Warriors Of Pakistan!” Asad Umer Tells Parhlo And Others After Defending Pakistan On Social Media!

Ever since the Pakistan Tehreek-i-Insaaf decided to raise the slogans of change and ‘tabdeeli’, the general populous of Pakistan has been sent in a frenzy demanding the said integrated slogans of betterment.

Finally, being in the government, the PTI is trying its best to fill in on the promises it once made to the people. The Finance Minister of the country, Asad Umer, recently held a press conference and a Question/Answer session with some of the leading publications of Pakistan, which was live streamed on Facebook.

Fortunately, Parhlo dot com, our enterprise, was selected among the very few publications to attend the event. A rampant session of questions and answers went on for about two hours with the Finance Minister, where every publication was to ask one question of their choice.

When it was Parhlo’s time to ask a question, our Head of Operations, Sarmad Shirazi turned heads around the table with his question regarding the Pulwama incident and the role of Pakistani publications in the digital media.

Parhlo asked: “After the Pulwama incident, all of Pakistan’s leading digital publications defended the country’s sovereignty on digital media, in this fifth generation style of warfare. How would the government help these publications and what sort of relief measures was it ready to provide?”

To this, Asad Umer replied in the most patriotic fashion, recognizing the hard work and diligent act of publications such as Parhlo, on defending Pakistan against India in the digital sphere.

Asad Umer replied with: “This is a very important thing you’re saying. The way Pakistan Airforce overcame their limitations, you did too. You are warriors of the country! I am a firm believer that if we don’t fix our global narrative, we won’t be able to achieve our goals.

India has been trying to build a global narrative through its media, making Pakistan look like the antagonist. Pakistani publications played a huge part in upholding the country’s sovereignty and things like these need to be done.”

After answering our question, the Finance Minister went on to ask us for a ‘recommendation list’ which would help publications such as ours out, and in the future, strengthen us to take India to the cleaners just as we did after February 27.

Asad Umer then went on to answer other questions on tax reforms, price hikes and the general situation of the economy in the country. However, to be recognized by the State for upholding Pakistan’s dignity and dissecting fact from fiction in India’s attempts of a digital war is an achievement in itself.

You can watch Finance Minister Asad Umer’s complete interview below!