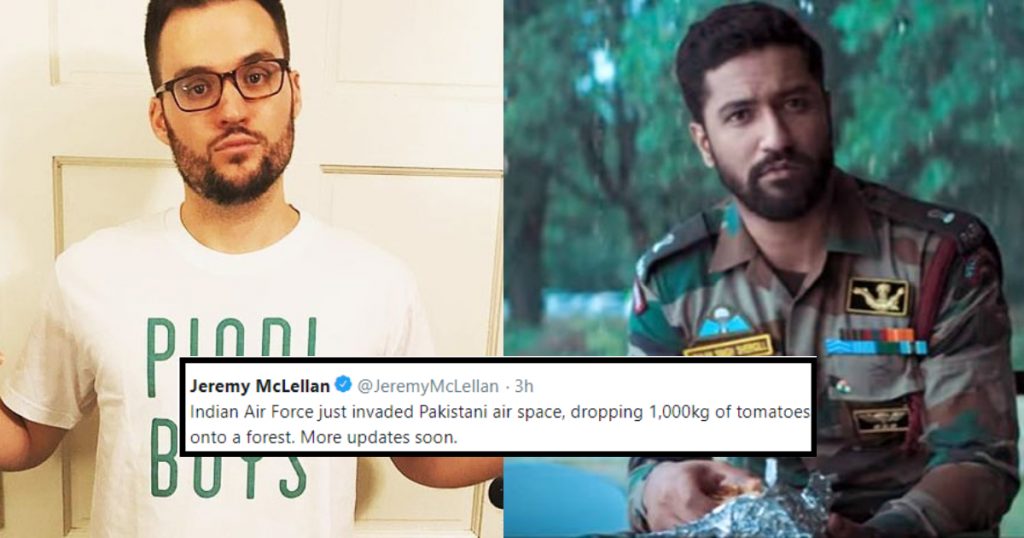 The Pulwama terror attack has been making waves for almost two weeks now. The feud between India and Pakistan was verbal so far, was limited to banning the Pakistani talent in India and making an effort to resolve issues via discussion.

However, recently The IAF planes crossed the Line of Control (LoC) and were chased away by Pakistani Air Force.

Although masses are outraged by this act by India, there’s one person who knows how to add a little humor to this entire situation and makes it a point to show Indians their place.

Our favorite gora-comedian, Jeremy McLellan continues to make headlines every now and then and proves to be savage AF!

His humorous tweets and Facebook posts have been increasingly popular now. Jeremy McLellan’s surreal rise to popular came off his left-wing political stance, his liberated thoughts of the Muslim community in general and his proactive approach towards the wrong and condemnable.

Since McLellan is always in the limelight for siding Pakistan over India, we simply love him! The guy may be a Caucasian on the outside but he’s a true desi in the inside.

The comedian has been hit with massive criticism by local Indians who cannot stop accusing him of being paid by Pakistan for tweets against India. Meanwhile, he continues to cruise his way through his world-class humor and gives us things to laugh about!

Here’s what Jeremy McLellan shared on his Twitter right after the Indians made a petty move that they ‘assumed’ would affect Pakistan. 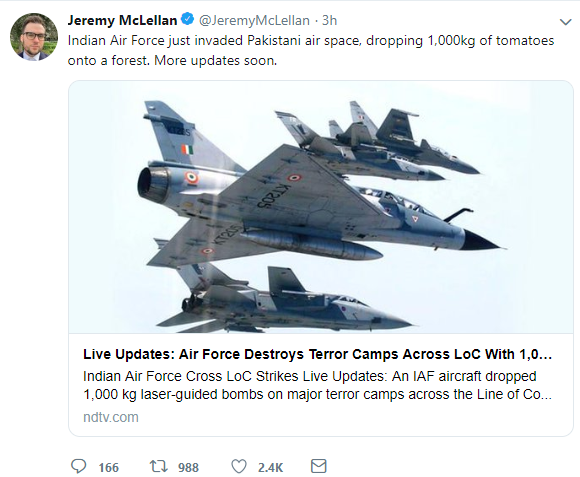 Pakistanis after Jeremy McLellan expressed his views on the recent incident that occurred!

His sarcasm game is pretty strong! No doubt Indians are all about the tamaatar!

This is so on point! Apparently, Indians like attention…

It’s no surprise that people enjoyed this response by McLellan and there was a flood of tweets. Check these out!

Could this get any better? I love this guy.

MySalutations to you Sir, no one canTroll indians better than u

Well, there’s no denying in that.

You are seriously the best thing that has ever happened to Pakistan and the worse thing for Endia ?

Moreover, Jeremy McLellan didn’t just stop there. He went on and was vocal about what Indians did. Have a look.

I swear this is beyond hilarious!

This guy is the God of sarcasm and humor who knows how to shut Indians up well.

After the Indian trespassing, an emergency meeting was called by Foreign Minister Shah Mahmood Qureshi. Furthermore, there will be a discussion with Prime Minister Imran Khan about the current stance and what actions need to be taken against it. President Imran Khan has yet to make a comment on this!