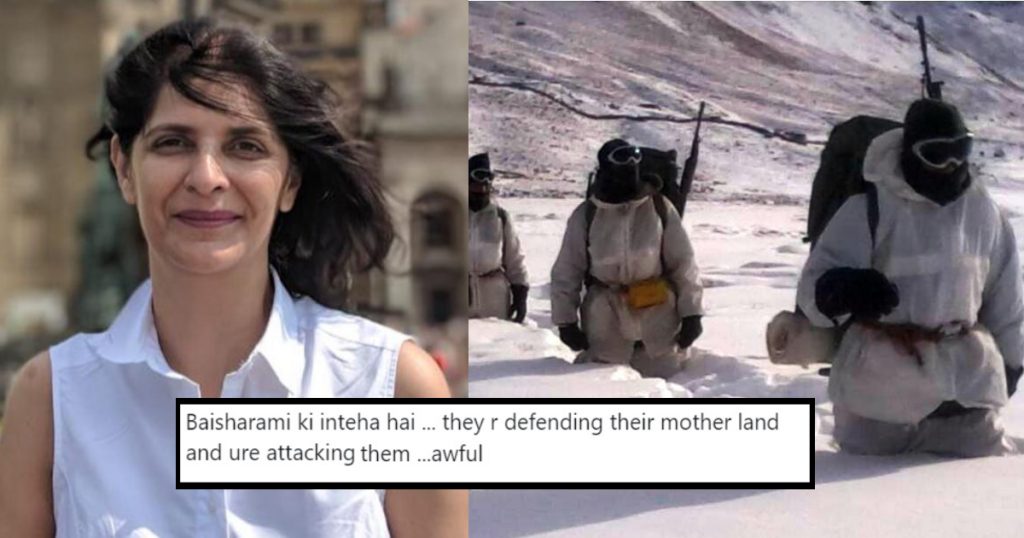 Gul Bukhari Tweet Just Mocked Pakistani Soldiers Training In Siachen And People Are Openly Bashing Her For It!

Back in June 2018 reporter and journalist, Gul Bukhari was taken while she was on her way to Waqt Studio on Fatima Jinnah road. The journalist is popular for her freedom of expression about the Pakistani army and politics. She has worked for several media groups and is currently contributing to The Nation.

Being a journalist in Pakistan with a voice can sometimes be extremely dangerous and journalists and reporters are always under the scrutiny of what they share.

Recently, Gul Bukhari took Twitter to express her views on the Pakistani Army, she wrote «Poor kids. What on Earth are they being used to sacrifice to conquer or defend? Just look at the futility of the ever-increasing defense budget & the young lives lost. Sharamnak»

Poor kids. What on Earth are they being used to sacrifice to conquer or defend? Just look at the futility of the ever increasing defence budget & the young lives lost. Sharamnak. pic.twitter.com/ybHcqQ3utr

Our Pakistani Army strives to protect the country and these men do it with pride. Even in a blizzard, these men are away from their loved ones solely so they provide a safeguard to our country.

Gul Bukhari calling them ‘poor kids’ doesn’t seem like a very ‘journalistic’ thing to do and why is it beyond her to differentiate between slavery and independence?

The responses to the above Tweet caused a stir on Twitter and people were outraged. Here’s how some of the people lashed back…

This user wrote that the reason Gul Bukhari is against the government is probably because she has another nationality.

Do u have some other nationality as well

This user wrote that it’s great that Gul Bukhari flew from Pakistan.

This one user questioned her achievements

Can you tell us pls wht great achievements hv you made tht whole pak should be proud of you? Nd u r criticzng these brave sons of pak soil.

Pakistan Army struggles in order to keep us local citizens safe and sane.

It is because of these Strong and determined soldiers pak soil, that you are living in your warm house safe and sound. #PakistanArmy

The hardships they go through are truly incredible and we’re all aware of that.

You cant feel the worth of sacrifices and hardships a pakistani soldier face in these sitautaions. Lady !!!!

This one user tried to give her a shut up call and asked her how can she even call herself Pakistani!

Do u have shame? all day spreading hate against Pakistan and its forces. How can u people call urself paki? Even this very pakistan gave u identity into this world..pitty people like u exists in the name of pak..

Gul Bukhari has been in the limelight for quite some time and people have been pointing fingers at her since she voices her opinion against Pakistan very frequently. Using the Pakistan Army in such reference just goes to show that low her opinion can be of our unsung heroes.

Let us know what do you all think of this!