Bilawal Bhutto Was Asked A Question About Larkana’s HIV Crisis And His Embarrassed Face Said It All!

Bilawal Bhutto Was Asked A Question About Larkana’s HIV Crisis And His Embarrassed Face Said It All!

Political parties of Pakistan reek of corruption and while N-league is facing accountability it was only a matter of time that People’s party too faced the same music. PPP government is notoriously known as the worst Pakistan has witnessed and is repeatedly termed as a disappointment. Their incompetencies as the ruling party is of such large scale that many experts claimed that they destroyed the country.

Analysts claim that their government brought more debt than other governments combined, however, that is a bold statement but one cannot overlook the damages caused by PPP. Another issue that Pakistan’s political structure faces is nepotism; merit has no place here and it is often the most incompetent fool given a position of authority because of some family relation. Bilawal Bhutto and Maryam Nawaz are the perfect examples of this plague.

Bilawal Bhutto who became the Chairman after his father Zardari retired without having to earn that position. He also has nothing to show for himself in terms of actual initiatives and successful projects that are beneficial to the country and its people.

Here’s proof of his incompetence and cowardice

What kind of a leader cannot even listen to a journalist’s questions? How rude it is to just walk off on someone while they speak to you that gives a clear message that you as a ‘chairman’ of one of the biggest political parties couldn’t care less about what an average Pakistani has to say to you? Although he was coming from a place of rage and wasn’t letting him speak but Bilawal could have shown some patience instead of deciding to completely leave the HIV press conference. Or was it that he had no answers to his questions? What will you do when NAB questions you, Mr. Bilawal?

These people who have ‘inherited’ the parties from their fathers never cared for Pakistan or it’s people. They, much like their fathers, are corrupt and aim to exploit their positions to their personal advantages for as long as they have the chance to do so.

Bilawal along with his father former president Zardari was summoned by NAB to appear before them in Rawalpindi for fake bank accounts case. However, Zardari excused himself and didn’t appear as he was to attend a case in Islamabad High Court case. Bilawal, on the other hand, is attending and ordered the party workers to gather in front of the NAB office, possibly for a protest or not, as Bilawal tweeted: 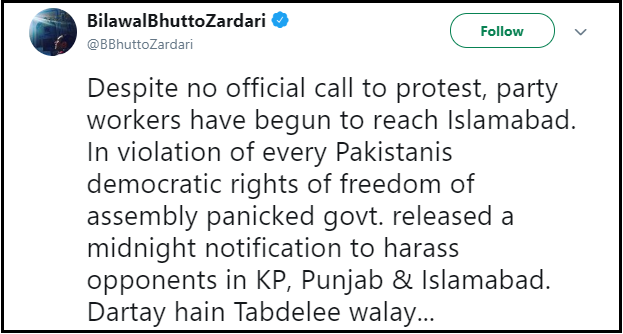 This is the kind of protest these workers had in mind

This is the disappointing facade of our political heads and their followers, neither looking remotely sound and educated in the matters they are responsible for.