This Tweet By Shahrukh Khan Is Making Pakistanis Troll|Parhlo.com 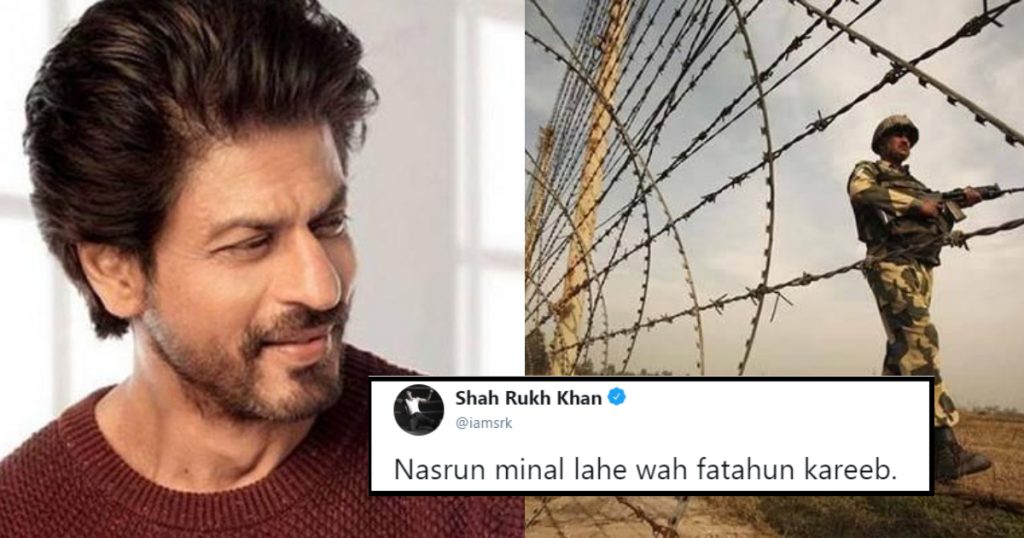 This Tweet By Shahrukh Khan Is Making Pakistanis Troll The King Of Bollywood Like Anything After The Balakot Incident!

Following the Pulwama incident Pak-Indo relations have gone haywire and after the petty move which India made yesterday by crossing the Pakistani territory is yet another topic of discussion.

The government said strikes targeted a training camp of the J-e-M group in Balakot. Pakistan said its jets had forced back the Indian planes and denied there were any casualties. India blamed Pakistan of allowing army groups to operate on its territory and says Pakistani security agencies played a key role in the Pulwama incident on 14th February.

After the incident, celebrities from both countries began to partake in the discussion of whether there should be a war or not and supported their respective homelands. From Salman Khan to Ajay Devgan and from Hamza Ali Abbasi to Armeena Rana Khan – everyone poured their hearts out.

Recently, we stumbled upon a tweet from 2013 by the King of Bollywood – Shahrukh Khan.

The Veer-Zaara actor took Twitter to express his views on the safety of Pakistan or so the masses have assumed. Or maybe they’re just trolling him? Let’s see!

Khan wrote, «Nasrun minal lahe wah fatahun kareeb» which translates to » «pray to God and he will give you the power to Succeed.» It’s a verse from the Quran.

Have a look at how people are responding to Khan for this tweet keeping the Pulwama incident in mind.

HOW IS THE JOSH?!

This one user wrote «Pakistan zindabad, Pakistani fauj paaindabad» which translates to all hail Pakistan and Pakistan Army.

Thank you for confirming Pakistan victory

Thanks for your support Bro
With your dua, Pakistan downed 2 jets.

Thats like my boy. Thanks for supporting pak
❤️?

Another user tweeted that Insha’Allah Pakistan will witness triumph!

This user decided to mock the Indian Army.

The Pakistan Army is no doubt protecting us but does that mean their loved ones deserve to lose their beloveds who are at the border? A value of life is priceless, whether it’s an Indian or a Pakistani. Let us know what and who are you in favor of!