A Picture Of Malala And Bilawal Bhutto Is Going Viral, Forcing People To Make Terrible Comments About Them! 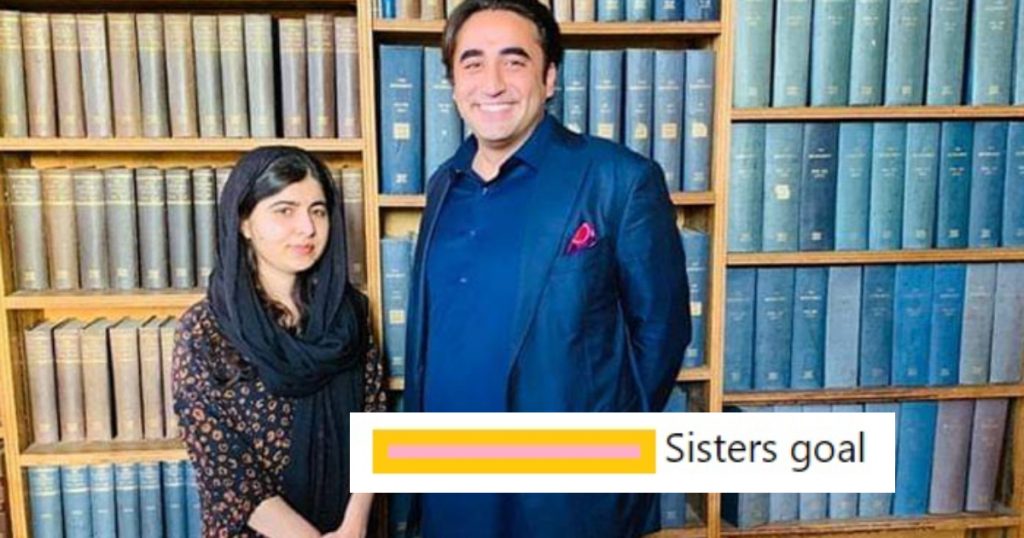 A Picture Of Malala And Bilawal Bhutto Is Going Viral, Forcing People To Make Terrible Comments About Them!

World’s youngest Nobel Peace Laureate and activist Malala Yousafzai had a meeting with Pakistan People’s Party chairman Bilawal Bhutto at the Oxford University on Thursday.  A tweet published on Thursday shows the two sharing a frame in what appears to be a library.

Malala and Bilawal apparently had a conversation on intellect and education in Pakistan.

Have a look at the picture of Malala and Bhutto

This picture apparently turned into a massive joke and the responses that people shared were quite amusing. Have a look!

This is beyond funny!

That’s a lot of hatred flooding in

This was the tweet that was shared by the Oxford Union.

.@BBhuttoZardari: “My mother always dreamt of a more inclusive and progressive Pakistan. Her message, her legacy will live on…I find it fulling to know that I am working towards my mother’s unfulfilled dream. It gives meaning and direction to my life.” pic.twitter.com/jBABXdDeTW

The entire meet up caused a stir in the public and several people went vocal about this rendezvous. Have a look at what some users had to say.

One user questioned the qualification of Bilawal Bhutto

Which qualification he have to be chairman ? Oh yes be son of zardari

This user asked that when will the Sindh progress!

Ask him about the 'progressive Sindh' which is not progressing at all.

One user asked about all the money laundering that Bhutto is behind.

Ask him about the billions sent through fake accounts

Another user wrote that the Bhutto family has certainly looted our country and no one is doing anything about that.

Oxford Union has gone to dogs. This is standard of this union to discuss his mother's dreams. The legacy she has left has looted Pakistan with both hands.

This person tweeted that Asif Zardari is corrupt.

Very true, one of the most corrupt person in Pakistan is Asif Ali Zardari and he is only second to Nawaz Sharif.

The entire meeting lead people to pour out their hearts – some negative and others positive. Malala Yousufzai has accomplished a lot in her life. The Nobel Prize Winner aims to change the narrative of education among Pakistani women.

Let us know if there’s anything you’d like to add to this story!